The national public service television company in Sweden, Sveriges Television (Svt), has realised that people used to watch TV together more often before compared to now. The technological development has given that you nowadays can watch whatever you want, whenever you want and from wherever you want. TV and production companies have adapted to this by creating digital services online, Svt has for example their own streaming service Svt-play, to fight for viewers against big streaming services like Netflix and Youtube.

It is a positive thing that people now have more freedom in what to watch as well as when and where to watch it. You can easier adapt your your video consumption and in several ways avoid difficulties or conflicts that traditionally could arise. A consequence is however that people watch more often by themselves, and that’s a bit depressing, isn’t it?

How can we bring back solidarity to the present context of video consumption while not compromising on the freedom that came from modernization? and at the same time get more people to choose Svt? This was the task of the project I worked on together with three colleagues and in collaboration with Svt. The aim was also to find a mobile solution.

One approach to the problem was to enable people to easier sync and plan their time for watching something together with family or friends. We tried a case for this perspevtive that can be seen below. The reasoning was that each user had a personal tableau that was in the shape of a timeline and it could then be synced with others to plan for seeing something together. See more of this prototype here. 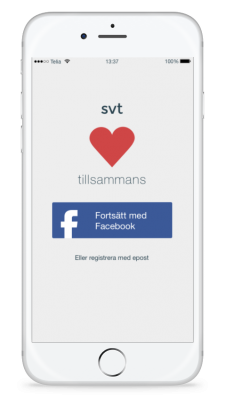 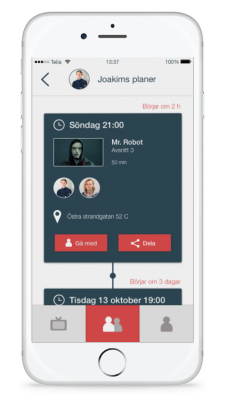 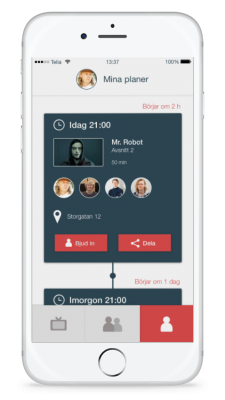 Another concept was to see something “together” even though you might be at different places or on different platforms. We evaluated the possibility of having a live video chat or text chat integrated with a TV stream.

After the first iteration of user interviews on each approach both by lofi and hifi-prototypes, we realised that the fundamental problem to why people don’t watch video together was actually not that they can’t, because they can and sometimes do. There’s a lot of popular tools that indirectly enables planning and communication. We didn’t want to compete with services like Facebook Messenger, Skype, et.c. That was part of the original purpose.

We discovered that the fundamental problem was that there is nothing that encourages or motivates people to watch video together. We then went forward in the design process with this as a new standpoint.

The ones who has changed their video consumption behaviour the most compared to how it used to be are the younger generations. It’s these people that in the greatest extent has switched to be using on-demand services and taken a habit of accessing whatever content they want from the internet. Today, you don’t need to be limited in your video consumption and it is above all younger people who has taken advantage of this fact. This entails that they are not as good at watching TV together with others. Svt has also lost viewers mostly from the younger audience. Our primary target group was therefore people in ages between 15 and 25, but the priority of keeping the application relevant to secondary targets remained.

After further extensive user tests in multiple iterations, we eventually came up with a concept we call Svt Journey. 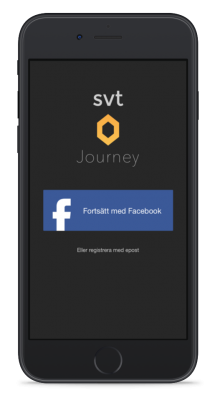 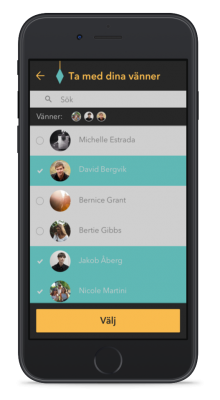 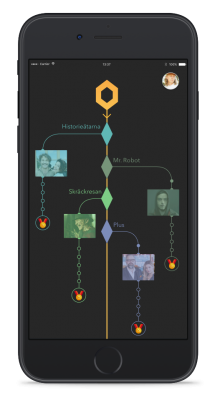 The idea is to encourage solidarity in your video consumption and at the same time make it so that it attracts more young people to Svt. The application consists of a personal journey, where this journey in turn consists of a story. A story can contain a series of episodes like a season from a TV-show or a custom collection of content. These stories are then experienced with friends, as users are getting through each step together. Users would achieve a sense of success and contribution to the progression, through elements of gamification and collaboration. Episodes are unlocked when all who are part of the story has seen the previous episodes. Users could then not watch too far ahead if others haven’t been part of the latest steps in the story. Reward is given in the form of collaboration points when watching together and trophies are given for each completed story. See more of the prototype here.

The user sensation of completing something together is powerful. The significance of this idea is that it concerns the surrounding problem of solidarity and motivation. How you later on actually watch something together, whether it is at the same location or at different places communicating simultaneously online, is not as relevant. Our application allows this to be optional and consequently, it doesn’t compromise on the user’s flexibility.

Svt was impressed by the result and sought to reflect if the development of something like this could be included in their budget.